While in Session: Good Parliament Productivity, Weak Examination of Bills

So far the monsoon session of Parliament has seen spectacular productivity with Lok Sabha spending 120% of allotted time and Rajya Sabha spending 91% of its time on debating issues and passing legislation. This session is among the most productive sessions since 2000.

The government’s legislative agenda for the session is ambitious with 43 Bills listed for passage over 18 days. So far, six of these Bills have been passed. This week, key Bills such as the Prevention of Corruption (Amendment) Bill, 2018, and the Fugitive Economic Offenders Bill, 2018 were passed by Parliament, and the Anti-Trafficking Bill, was passed in Lok Sabha, a week after its introduction.

While indicators such as time spent by Parliament on debating Bills and government policies provide insight on whether Parliament is functioning well, what is equally important is whether the process followed in such deliberations is rigorous and well informed.

With regard to the legislative process in Parliament, an indication of this rigour is whether the proposed Bill has benefited from detailed examination which includes public feedback and inputs from experts.

The passage of the recent Prevention of Corruption (Amendment) Bill is illustrative of this legislative rigour. 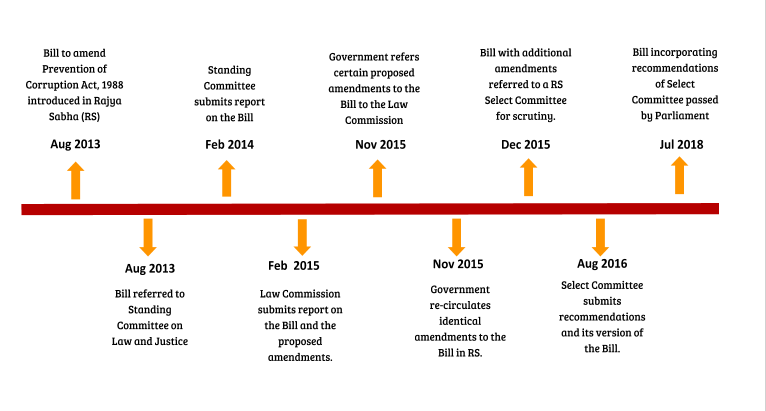 Under the Prevention of Corruption Act, 1988 taking of a bribe by a public official was an offence. The Bill unambiguously made the giving of a bribe also an offence. Therefore, the Bill treated the taker of a bribe and the giver of a bribe at par with each other.  The Standing Committee examining the Bill invited public feedback on its provisions and deliberated on the various provisions. The committee was of the view that it was unfair to treat all circumstances of bribe giving equally. For example, it did not differentiate between a bribe giver who is harassed/ coerced into giving a bribe (such as those applying for a passport or ration card) from one who willingly colludes to give a bribe in order to gain undue benefits (such as bidding for a license or government contract).  The committee was of the view that the Bill should provide a coerced or harassed bribe giver immunity so that it allows him to report such incidents, thereby helping reduce the occurrence of bribes.

This formulation of the standing committee was further reviewed by the Law Commission and the Select Committee of the Rajya Sabha.  Eventually the Bill passed by the parliament states that a person who is caught giving a bribe will not be prosecuted, if he informs the police and assists in the investigation of the offence against the said public servant.

Since Parliament has limited time for discussing Bills, parliamentary committees were formed to allow detailed examination and deliberation on government Bills, and their recommendations were to be tabled in Parliament such that all MPs benefit from their expertise. However not all Bills are subject to such in-depth scrutiny as it is not mandatory for Bills to be examined by a committee before being passed.

The graph below demonstrates the recent decline in scrutiny of Bills before being passed by Parliament. In the 16th Lok Sabha, only 26% of the Bills introduced have been referred to committees. Compare this to the 14th and 15th Lok Sabha, where 60% and 71% of Bills were referred to Standing Committees.

One such example of a Bill being passed without being referred to a committee, is the Fugitive Economic Offenders Bill, 2018 which was passed by Parliament this week. The Bill allows a person to be declared as a fugitive economic offender (FEO) if there is an arrest warrant against him for an offence over Rs 100 crore and if he has left the country to avoid facing prosecution.  These offences include fraud on creditors, money laundering or tax evasion.

One of the contentious provisions of the Bill is that a person declared as an FEO or any company he is associated with may be barred by from filing or defending any civil claim in a court. So, for example, a person who is declared as an FEO may wish to file a divorce or defend an inheritance case. Owing to the restraint on filing civil claims, the person may not be allowed to exercise his right to approach a legal forum to seek a remedy.  Similarly, there may be instances where the FEO is a majority shareholder in a company which has borrowed money from certain creditors. The provision in the Bill allows a company to be barred from filing cases against vendors or suppliers of goods, or defend tax dues imposed on it.

It could be argued that this provision of the Bill violates Article 21 of the Constitution, which is a fundamental right to life, which also guarantees the right to access to justice before a legal forum. During the discussions of the Bill, several members in both houses voiced concerns about the constitutionality of this provision and asked for it to be referred to a Standing Committee for further examination of these issues. However, it was passed by both houses within one week of its introduction. It now remains to be seen whether this provision passes the constitutional muster of the courts.

Similarly, the Anti-Trafficking Bill was passed in Lok Sabha a week after its introduction. The Bill creates a complex institutional mechanism at the national, state and district level to investigate and prevent cases of trafficking of persons and provide for their rehabilitation. Currently a range of laws such as the Indian Penal Code, 1860, the Immoral Traffic Prevention Act, 1986, the Juvenile Justice Act, 2015 and the Child Labour Act, 1986 among others have provisions related to trafficking.  Instead of consolidating a complex web of existing laws, the Bill creates a parallel enforcement and institutional mechanism to deal with trafficking.

With important Bills like the DNA Technology (Use and Application) Regulation Bill slated for introduction and passage within the session, it remains to be seen whether parliament exercises its might in enacting Bills after thorough examination and debate. The question is whether parliament will adequately investigate the legal and technical provisions of such Bills and be open to feedback from a range of experts and stakeholders. This will help reconcile divergent perspectives and build broader consensus on their provisions.