Editor's note: The recently concluded Budget Session of Parliament was, by all accounts, the least productive in at least a decade, marked by protest, adjournment, and very little constructive debate, let alone passage of bills. Firstpost will examine, by way of a multi-part series spread across a six-week span, the reasons why the parliamentary process in particular, and the democratic apparatus in general, has failed India's citizens. The clutch of essays, written by experts in the Constitution and constitutional law, will investigate the defects, introduced by design, that have enabled the degeneration of legislative functioning. Series curated by Bangalore-based lawyer and tutor of democracy and active citizenship, Malavika Prasad.

The primary function of Parliament is to hold the government accountable. The Constitution states that the Council of Ministers (Executive) will be collectively responsible to the Lok Sabha. There have been instances in the past where the Parliament has been unable to carry out this responsibility effectively. 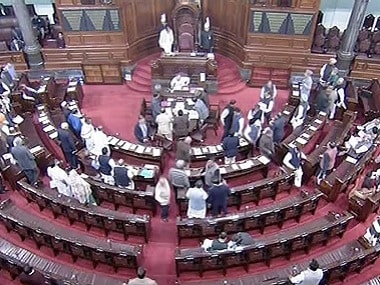 The recent Budget Session of Parliament was the least productive in over a decade. PTI

Most recently, the Budget Session was washed out due to disruptions and no business could be transacted. It was the least productive Budget Session in almost two decades. There were severe disruptions in Parliament owing to several demands by the Opposition parties, such as Andhra Pradesh's demand for special status, etc. The Finance Bill was passed without discussion and the entire budget of over 24 lakh crores was guillotined (that is, passed without discussion). This session also witnessed a notice for a no-confidence motion being moved against the government. In this article, we examine some of the avenues through which the Parliament exercises its oversight function.

MPs may raise issues in Parliament through debates or motions. Debates elicit a reply and motions entail voting. A motion may be moved in Parliament to discuss important policies of the government and topical concerns (such as irregularities in the banking sector). In this Session, irregularities in the banking sector were listed for discussion; however, it was not taken up due to repeated disruptions.

This seeks to ensure that in a parliamentary democracy, a government remains in power only as long as it has the support of members directly elected by the people. Till date, 26 no-confidence motions have been moved.

Various issues may also be debated in Parliament to discuss the functioning of the government. In the past, such discussions have included topics such as the agrarian crisis, rise in prices, corruption, etc. In this session, no issues of public importance were taken for discussion. In order to improve government accountability in Parliament, in the UK and Australia, the Opposition forms a shadow cabinet. Under such a system, Opposition MPs track a certain portfolio, scrutinise its performance and suggest alternative programs. This allows for detailed tracking and scrutiny of ministries and assists MPs in making constructive suggestions.

Every day when Parliament is in session, one hour is reserved for the Question Hour. During the Question Hour, MPs raise questions to ministers on any aspect of functioning or policy-making. This hour allows MPs to question the government on its policies and is vital in ensuring accountability of the Executive.

In the 16th Lok Sabha, Question Hour functioned for 56 percent of its scheduled time and, 18.5 percent of the questions were answered orally. In several years, time was lost due to disruptions in the House. In such a situation, the Speaker has been given the powers to suspend the disrupting MPs. In the Budget Session, this power was not exercised by the Speaker. While Parliament can sit for additional hours to transact other business, any time lost during Question Hour is not made up.

Parliamentary Committees are constituted to scrutinise the actions and policies of the government in greater detail. Since Parliament has limited time for discussing a legislation or issues, these committees provide a platform for detailed deliberation and discussion. They examine finances, legislation, and working of ministries. The recommendations of these committees are not binding on the House.

However, in the past, several bills, such as the constitutional amendment to levy GST was referred to a committee and its recommendations served to strengthen the provisions of the Bill. In the 16th Lok Sabha, 27 percent of Bills introduced in Parliament have been referred to a committee, which is low when compared to earlier Lok Sabhas.

In countries such as the UK, Bills are mandatorily referred to committees of both Houses of Parliament. These committees have the power to amend Bills. However, their amendments may be overturned by MPs during a discussion on the Bill. In contrast, in India, the Speaker or Chairman decides whether to refer a Bill to a parliamentary committee. The National Commission to review the working of the Constitution (NCRWC) has recommended that all Bills should be referred to committees.

The President of India has been given certain legislative powers, such as promulgating ordinances. This may be on the recommendation of the Council of Ministers. The Supreme Court held in 1986 that the power to promulgate ordinance is a tool meant to be used in extraordinary circumstances, and not as a substitute for the law-making powers of the Legislature.

In the 16th Lok Sabha, 33 ordinances have been promulgated. In some cases, the government has re-promulgated lapsed Ordinance. For example, the Enemy Property (Amendment) Ordinance has been re-promulgated five times. Other countries such as the US, Canada and the UK do not confer such legislative powers upon the Executive. In case of an urgent requirement, an emergency session of the Parliament may be convened.

In India, even though the Parliament is entrusted with examining the functioning of the policies and actions of the government and holding it accountable, it does not have the power to convene itself. The president, on the advice of the Council of Ministers, is responsible for summoning Parliament, and therefore, indirectly deciding when Parliament should exercise its oversight functions over the government.

In the 16th Lok Sabha, Parliament has met for 287 days over a span of four years. In certain countries such as the UK and Australia, the number of sittings is calendared in advance at the beginning of the year. In Pakistan, the Speaker is required to summon Parliament if one-fourth of the members requisition in writing. This allows for greater business to be transacted within the Parliament itself. The NCRWC has recommended fixing the minimum number of working days for Lok Sabha and Rajya Sabha at 120 and 100 days respectively.

There are safeguards built into the parliamentary system to protect against disruptions. In places where there are institutional lacunae to fill, our Parliament may borrow from the established norms of other parliamentary systems. Only then can Parliament hold the government accountable and effectively scrutinise its functioning.

The author is a senior analyst at PRS Legislative Research.