The National Education Policy 2020: Recommendations and the current situation

The National Education Policy (NEP) 2020 was released on July 30, 2020.  It will replace the National Policy on Education, 1986.  Key recommendations of the NEP include: (i) redesigning the structure of school curriculum to incorporate early childhood care and education, (ii) curtailing dropouts for ensuring universal access to education, (iii) increasing gross enrolment in higher education to 50 percent by 2035, and (iv) improving research in higher education institutes by setting up a Research Foundation. We examine the current status of education in the country in view of some of these recommendations made by the NEP in this post.

The NEP states that the Right to Education Act, 2009 has been successful in achieving near-universal enrolment in elementary education, however retaining children remains a challenge for the schooling system.  As of 2015-16, Gross Enrolment Ratio was 56.2 percent at the senior secondary level as compared to 99.2 percent at the primary level.  GER denotes enrollment as a percent of the population of the corresponding age group.

Data for all groups indicate a decline in GER as we move from primary to senior secondary for all groups.  This decline is particularly high in the case of Scheduled Tribes.  Further, we analyse the reason for dropping out from school education.  Data suggests that the most prominent reason for dropping out was: engagement in domestic activities (for girls) and engagement in economic activities (for boys).

The NEP recommends strengthening existing schemes and policies which are targeted for such socio-economically disadvantaged groups (for instance, schemes for free bicycles for girls or scholarships) to tackle dropouts.  Further, it recommends setting up special education zones in areas with a significant proportion of such disadvantaged groups.  A gender inclusion fund should also be set up to assist female and transgender students in getting access to education.

Increasing GER in higher education to 50 percent by 2035 The NEP recommends that for increasing GER, the capacity of existing higher education institutes will have to be improved by restructuring and expanding existing institutes. It recommends that all institutes should aim to be large multidisciplinary institutes (with enrolments in thousands), and there should be one such institution in or near every district by 2030.  Further, institutions should have the option to run open distance learning and online programmes to improve access to higher education.

In the table below, we look at the results of the National Achievement Survey 2017 to analyse the learning levels of students at Grade 3 in language and mathematics.  The results of the survey suggest that only 57 percent students in Grade 3 are able to solve basic numeracy skills related to addition and subtraction.

The Policy states that establishing primary schools in every habitation across the country has helped increase access to education.  However, it has led to the development of schools with low numbers of students.  The small size of schools makes it operationally and economically challenging to deploy teachers and critical physical resources (such as library books, sports equipment).

With respect to this observation, we analyse the distribution of schools by enrolment size in the table below.  Note that, as of September 2016, more than 55 percent of primary schools in the country had an enrollment below 60 students.

To overcome the challenges associated with the development of small schools, the NEP recommends grouping schools together to form a school complex.  The school complex will consist of one secondary school and other schools, Anganwadi in a 5-10 km radius.  This will ensure (i) an adequate number of teachers for all subjects in a school complex, (ii) adequate infrastructural resources, and (iii) effective governance of schools.

According to the All India Survey on Higher Education 2018-19, India has 993 universities, 39,931 colleges, and 10,725 stand-alone institutions (technical institutes such as polytechnics or teacher training institutes). The NEP recommends that all HEIs should be restructured into three categories: (i) research universities focusing equally on research and teaching, (ii) teaching universities focusing primarily on teaching, and (iii) degree-granting colleges primarily focused on undergraduate teaching.  All such institutions will gradually move towards full autonomy - academic, administrative, and financial.

Setting up a National Research Foundation to boost research

The NEP states that investment on research and innovation in India, at only 0.69 percent of GDP, lags behind several other countries.  In the figure below, we detail India’s expenditure on research and development (R&D) in the last few years.  Note that the total investment on R&D in India as a proportion of GDP has been stagnant at around 0.7 percent of GDP.  In 2018-19, the total expenditure on R&D in India was Rs 1,23,848 crore.  Of this, Rs 72,732 crore (58 percent) of expenditure was by the government, and the remaining (42 percent) was by private industry. 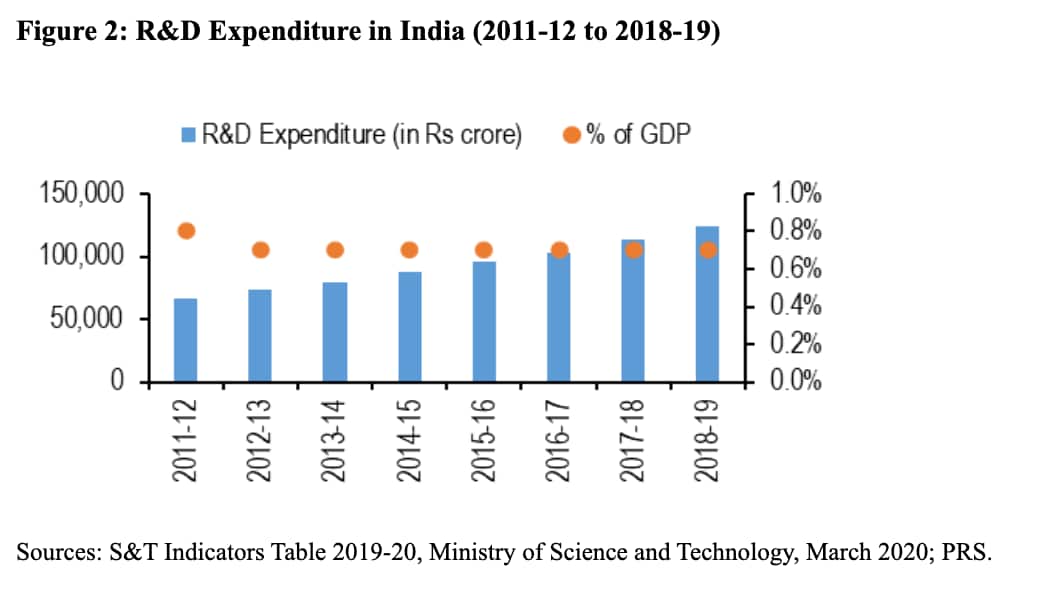 To boost research, the NEP recommends setting up an independent National Research Foundation (NRF) for funding and facilitating quality research in India.  The Foundation will act as a liaison between researchers and relevant branches of government as well as industry.  Specialised institutions which currently fund research, such as the Department of Science and Technology, and the Indian Council of Medical Research, will continue to fund independent projects.  The Foundation will collaborate with such agencies to avoid duplication.

The NEP states that alternative modes of quality education should be developed when in-person education is not possible, as observed during the recent pandemic.  Several interventions must be taken to ensure inclusive digital education such as: (i) developing two-way audio and video interfaces for holding online classes, and (ii) use of other channels such as television, radio, mass media in multiple languages to ensure reach of digital content where digital infrastructure is lacking.

6 percent of public investment on education In the figure below, we look at the disparities within states in education spending.  In 2020-21, states in India have allocated 15.7 percent of their budgeted expenditure towards education.  States such as Delhi, Rajasthan, and Maharashtra have allocated more than 18 percent of their expenditure on Education for the year 2020-21.  On the other hand, Telangana (7.4 percent), Andhra Pradesh (12.1 percent) and Punjab (12.3 percent) lack in spending on education, as compared to the average of states.

—Anurag Vaishnav is an analyst at PRS Legislative Research. The views expressed are personal