Explained: As states reduce legislators’ salaries, how MLAs are paid, how much cuts will help

As the Uttar Pradesh Assembly prepares to meet Thursday (August 20), on its agenda is to ratify salary cuts for legislators, announced amid the Covid-19 breakout by the government when the House was not in session.

Apart from UP, Bihar, Gujarat, Karnataka, Himachal Pradesh and Kerala have announced salary cuts for their legislators to curb state expenditure amid the pandemic. The salaries and certain allowances have been reduced for one year, starting April 2020. With the exception of Bihar (which brought in the cuts through rules), all the other states promulgated Ordinances to bring the changes into effect.

Assam and Maharashtra are in the process of cutting legislators’ salaries, and in Haryana, political parties have agreed that their MLAs will give up a percentage of their pay.

The salaries of MPs have also been reduced by 30 per cent for similar reasons.

What is Uttar Pradesh doing

Uttar Pradesh, with 500 legislators, is the largest state Assembly in the country. In 1980, the basic salary of the state’s MLA/MLC was Rs 500 a month. This amount was intermittently revised, and by 2016 they were being paid Rs.10,000 a month. The last upward salary revision was four years ago before the UP state elections, when then-Chief Minister Akhilesh Yadav had upped the basic salary of the state’s public representatives to Rs 25,000 per month. 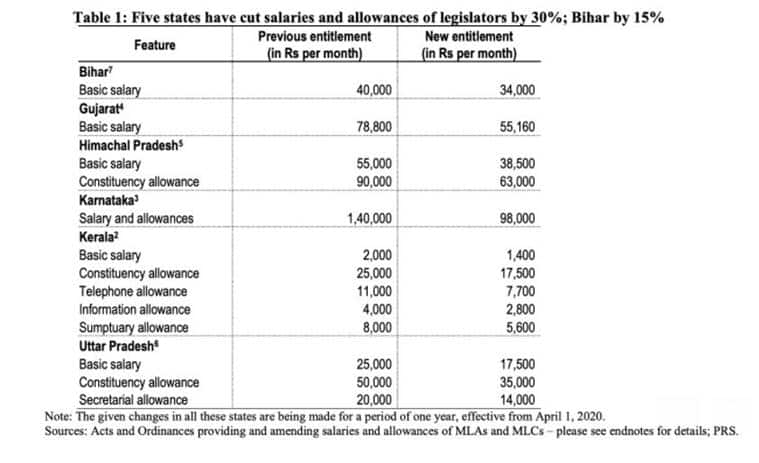 Five states have cut salaries and allowances of legislators by 30%; Bihar by 15%

Earlier this year, Yogi Adiyanath’s government cut the salary of the state’s legislators by 30 per cent, bringing it down to Rs17,500 per month. This reduction is a temporary measure applicable for a year.

How are elected representatives paid in different states

Amid the states that have announced the cut, before this measure, Kerala MLAs received the lowest basic salary at Rs 2,000 per month. Gujarat MLAs had the highest basic salary at Rs78,800. In addition to the basic salary, MLAs across the country receive allowances for office and constituency expenses. They also receive free housing in the state’s capital and concessions for travelling in the state. Legislators also get a small daily allowance for attending a sitting of the Assembly.

MLAs usually determine their own salaries by passing a law in the legislature brought by the government. States like Gujarat and Maharashtra have pegged the salaries of their legislators to the salaries of civil servants in their states.

In one of his last acts as the Union finance minister, Arun Jaitley linked the salaries of MPs to the cost of inflation index, and provided that the salaries will be revised every five years.

How much the salary cuts will help

Reducing the salaries of state legislators will result in negligible savings. Bihar, which like Uttar Pradesh has a bicameral legislature, reduced the salaries of its MLAs by 15%. It will save Rs 2.1 crore, 0.001% of its proposed expenditure for the year.

Negligible savings through deductions in salaries

Authors are from PRS Legislative Research