Parliament logjam raises a big question — how can it remain insulated from electoral compulsions?

The current washout of the Parliamentary session throws open larger questions about the role and relevance of the institution. Broadly speaking, Parliament, the highest elected institution in the country, is mandated to frame laws, keep the executive i.e. the government in check, maintain financial oversight and represent the overall interests of the citizens. As per parliamentary rules, there are a number of procedural mechanisms that equip a member to carry out each of these functions effectively.

In this article, we look at the functioning of Parliament on some of these parameters during the recently concluded Budget Session.

As the country’s foremost law-making body, Parliament must thoroughly debate and scrutinise Bills that the government pilots before passing them. Legislative business in each session is a significant aspect of the work transacted on the floor of the House. Before the beginning of the session, the government announced its legislative agenda that it intended to pursue. 32 bills for consideration and passage and additional 9 bills for introduction and passage were scheduled to be taken up.

Of these, only two were taken up. The Payment of Gratuity (Amendment) Bill was passed by Parliament and the Specific Relief (Amendment) Bill was passed by Lok Sabha. Both these bills were passed without discussion and participation of any members. Passage of bills in such a manner without adequate debate has serious implications and undermines the role of Parliament.

The other aspect of parliamentary functioning is its role of exercising financial oversight. The Budget session is especially significant in this regard. The Finance Minister presents the Budget in the Parliament, and it is passed after detailed deliberation and scrutiny.

Parliament carries out this duty broadly in two ways. First, scrutiny of detailed ministry allocations (Demands for Grants) in departmentally related standing committees during the intersession period, and second, debate and discussion on the floor of the House. Ideally, both these aspects of deliberation are critical for Parliament to perform its function fully.

This year, the Finance Minister presented a 24 lakh crore Budget on February 1. While Standing Committees studied each ministry’s allocation, the Budget was passed without any debate on the floor of the House. Least amount of time was spent by both Houses on debating the Budget since 2000.

In Lok Sabha general discussion on the Union Budget took place during the first half of the session for 15 hours. However, the since 2000, on an average, Lok Sabha has spent 53 hours discussing the Union Budget. Another function of Parliament is to fix accountability of the government. One such instrument available to members is the Question Hour. During Question Hour, members from both the opposition and treasury ask ministers tough questions about different aspects of their ministry’s work. 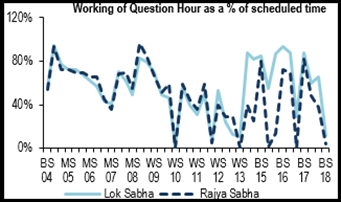 Finally, as the highest deliberative body, Parliament is mandated with discussing key issues of national importance and represent the interest of the voters. Various debates and interventions allow members to participate in such discussions.

This session saw the Lowest number of discussions on matters of public importance, since 2014. The issue of irregularities in the banking sector was listed for discussion in both house but could not be taken up due to continuous disruption. Members across political parties wanted to raise issues related special status for Andhra Pradesh, constitution of Cauvery Management Board, atrocities towards SC/STs, among others. 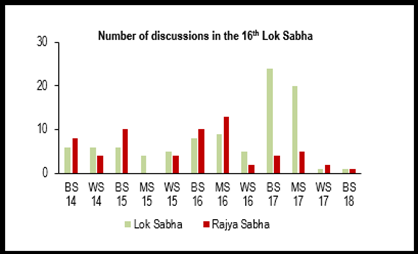 As data suggests across these parameters, Parliament’s role in all four aspects witnessed a decline in this Budget Session. Political vagaries often tend to affect the working of Parliament, especially in times running up elections. However, it is now time to deliberate over how the institution can be strengthened and remain insulated from such electoral compulsions. This would also ensure that sessions such as this one are an anomaly and not a norm.

(The author is Program Officer at PRS Legislative Research.)