Editor's note: The recently concluded Budget Session of Parliament was, by all accounts, the least productive in at least a decade, marked by protest, adjournment, and very little constructive debate, let alone passage of bills. Firstpost will examine, by way of a multi-part series spread across a six-week span, the reasons why the Parliamentary process in particular, and the democratic apparatus in general, has failed India's citizens. The clutch of essays, written by experts in the Constitution and constitutional law, will investigate the defects, introduced by design, that have enabled the degeneration of legislative functioning. Series has been curated by Bangalore-based lawyer and tutor of democracy and active citizenship, Malavika Prasad.

On 21 December, 2015, the Insolvency and Bankruptcy Code (IBC) was introduced by the finance minister. The 118-page Bill defined the process for dealing with insolvent individuals and companies. The Bill, listed for passage on the following day, saw several objections from the Opposition and was subsequently referred to the Joint Select Committee. 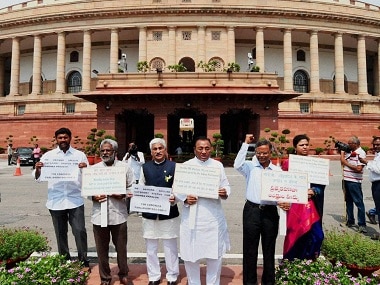 The committee deliberated on the Bill for four months and presented a revised version of the legislation in its report tabled during the 2016 Budget Session. The government accepted the recommendations and also took up the committee’s version of the bill for passage. The legislation related to Goods and Services Tax, passed a few months later, also went through a similar process and key recommendations of the Select Committee were accepted in the final bill passed.

Parliamentary Committees serve as a forum of deliberation and are the backbone of our parliamentary system. This column highlights the role of parliamentary committees, the issues in the present system and measures that can be taken to strengthen their functioning.

The key responsibility of the Parliament is to be a body of oversight over the executive. The executive proposes the formulation of several laws and policies that affect us in various ways. Parliament ensures these are discussed and scrutinised before approval. For this, there are various interventions available for a legislator (question hour, calling attention, etc).

Due to capacity and time constraints, it is not possible for Members of the Parliament to scrutinise all policies and legislation on the floor of the House. It was felt that by forming smaller groups of members to examine the subjects would ensure deeper deliberation and debate.

In India, the earliest Parliamentary Committees were the Public Accounts Committee (1921) followed by the Estimates Committee (1950). In 1993, the current system of Department Related Standing Committees (DRSC) was established replacing subject committees and the structure has largely remained the same till date.

Members from both Houses across party lines are represented in most of these committees. Since ministers are part of the executive and legislature is a separate arm to keep a check on the executive, ministers are not a part of any Standing Committees.

Parliament sessions are typically scheduled thrice a year and committees meet frequently around the year. Between 1952-1962, the Parliament convened for about 120 days a year. The sittings have gradually declined to 65 days in 2016 and 2017. Between 2009-16, the Standing Committees convened for an average of 450 sittings a year and clocked in more hours of work than the Lok Sabha.

In recent years, instances of disruption in Parliament has increased. For example, the 2018 Budget Session was the least productive budget session in the last 18 years. However, the proceedings of the committees — held behind closed doors — are insulated from these disruptions.

It ensures that detailed scrutiny of government finances, legislation and working continues to take place even if Parliament sessions are disrupted. With a representation of members from across political parties, these committees also act as a consensus-building platform.

Another feature of the committee system is its engagement with relevant stakeholders and power to summon witnesses. The committees regularly seek feedback from citizens and experts on subjects it examines. For example, the RBI governor was summoned by the Finance Committee on the subject of demonetisation; then Secretary for Foreign Affairs, S Jaishankar appeared before the Committee on Eternal Affairs on relations between India and China.

After detailed discussion, the prepared reports are tabled in Parliament. These comments add value to the discourse in Parliament. The committees also publish reports on the status of implementation of their recommendations.

Issues in the committee system

While the Standing Committees have improved the Parliament’s ability to examine policies better, there are several challenges that need further attention. Fewer bills referred: To strengthen the lawmaking process, it is important that all bills are examined by Standing Committees before passage. This ensures thorough scrutiny of the law. This practice is seen in legislatures of most developed countries.

In India, there is no such rule to ensure all bills are referred to committees. As a convention, the ministry piloting the bill recommends the Speaker to refer a bill to the Standing Committee.

The 14th and 15th Lok Sabha saw 60 percent and 71 percent of bills referred to committees. This number has dipped sharply to just 27 percent in the 16th Lok Sabha. The attendance of members in committee meetings has been a cause for concern as well, which is about 50 percent since 2014-15.

Longer tenure for members: The committee system allows a smaller group of legislators to develop technical expertise on a particular subject and ensure better deliberation. In the present format, the members are nominated to a Standing Committee for one year. However, shifting of committees every year defeats this purpose. The vice-president, as chairman of the Rajya Sabha, recently emphasised on the need to extend the tenure of committee members.

Discussion of committee reports: The committees make several recommendations in their reports after thorough analysis and feedback from stakeholders. Since these are recommendatory in nature, the executive may not necessarily accept them. Moreover, the reports of the committees are not taken up for discussion in Parliament except for references in certain debates on bills. Several of committee’s recommendations are neither implementednor discussed.

Research Support: Committees examine issues that are technical in nature.  To equip members to gain an in-depth understanding of issues and finally give sound and nuanced recommendations, it is important that quality research is made available to them. Institutional research support will allow committees to serve as expert bodies to examine complex policy issues.

The need for referring all bills to committee, longer tenure for members and strengthening committees with adequate research support also find mention in the National Commission to Review the Working of the Constitution, 2002 (NCRWC).

Another aspect of committee scrutiny is financial matters like budgets. At present, the Standing Committees analyse the budgets of the respective ministries. The NCRWC argues for trimming the number of Standing Committees and entrusting them with additional responsibilities of financial oversight and doing away with existing finance committees to avoid overlapping of work. It also makes a case for establishing Standing Committee on Economy providing space for deliberations on economic policies and its implementation separately.

There are existing practices in other countries that can contribute to strengthening the committee system in India. For example, in the British House of Commons, the committees interact on certain overlapping subjects. Committees related to defence, foreign affairs, international development, and trade & industry form the Quadripartite Committee which examines government’s arms export licenses.

Strengthening the committee system can go a long way in improving the quality of laws drafted and minimise potential implementation challenges. The need of the hour is for greater and effective utilisation of Parliamentary Committees to strengthen Parliament as a deliberative body which can ensure effective oversight.

The author is a Program Officer at PRS Legislative Research and handles engagement with state legislators.