‘Private’ efforts at legislation: How they are made, how often they succeed

As the Ram Janmabhoomi-Babri Masjid pot bubbled last week, nominated Member of Rajya Sabha Rakesh Sinha said he would bring a private member’s Bill “on the Ram Temple”. How are private member’s Bills introduced and discussed? What chance does such a Bill have of becoming law?

Any MP who is not a Minister is referred to as a private member. Parliament’s key role is to debate and make laws. Both Ministers and private members contribute to the lawmaking process. Bills introduced by Ministers are referred to as government bills. They are backed by the government, and reflect its legislative agenda. Private member’s bills are piloted by non-Minister MPs. Their purpose is to draw the government’s attention to what individual MPs see as issues and gaps in the existing legal framework, which require legislative intervention.

Introduction in the House

The admissibility of a private member’s Bill (like the one Rakesh Sinha intends to bring) is decided by the Rajya Sabha Chairman. (In the case of Lok Sabha, it is the Speaker; the procedure is roughly the same for both Houses.) The Member must give at least a month’s notice before the Bill can be listed for introduction; the House secretariat examines it for compliance with constitutional provisions and rules on legislation before listing.

Up to 1997, private members could introduce up to three Bills in a week. This led to a piling up of Bills that were introduced but never discussed; Chairman K R Narayanan, therefore, capped the number of private member’s Bills to three per session. 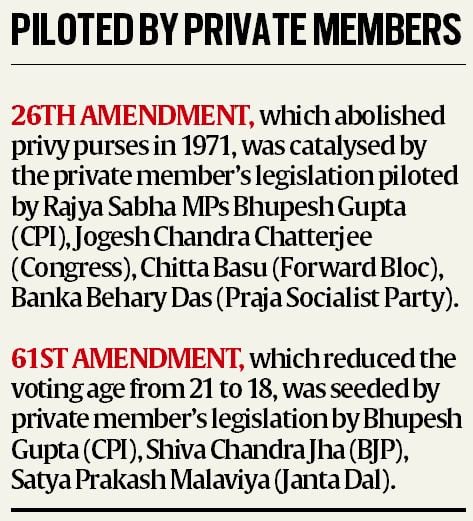 On the scheduled Friday, the private member moves a motion for introduction of the Bill, which is usually not opposed. Two recent exceptions to this convention were in 2004, when nominated MP Vidya Nivas Misra’s Bill seeking to amend the Preamble of the Constitution was opposed; and in 2015, when Shashi Tharoor’s Bill to decriminalise homosexuality was not introduced in Lok Sabha after the BJP’s Nishikant Dubey forced a division, which led to the motion being defeated. (The Supreme Court struck down IPC Section 377 this September.)

Upon conclusion of the discussion, the Member piloting the Bill can either withdraw it on the request of the Minister concerned, or he may choose to press ahead with its passage. In the latter case, the Bill is put to vote and, if the private member gets the support of the House, it is passed. In 1977, Rajya Sabha passed a private member’s Bill to amend the Aligarh Muslim University Act. The Bill then went to the sixth Lok Sabha, where it lapsed with the dissolution of the House in 1979. In 2015, Rajya Sabha passed The Rights of Transgender Persons Bill, 2014, a private member’s Bill piloted by Tiruchi Siva of the DMK. The Bill is now pending before Lok Sabha.

The last time a private member’s Bill was passed by both Houses was in 1970. This was the Supreme Court (Enlargement of Criminal Appellate Jurisdiction) Bill, 1968. Fourteen private member’s Bills — five of which were introduced in Rajya Sabha — have become law so far.